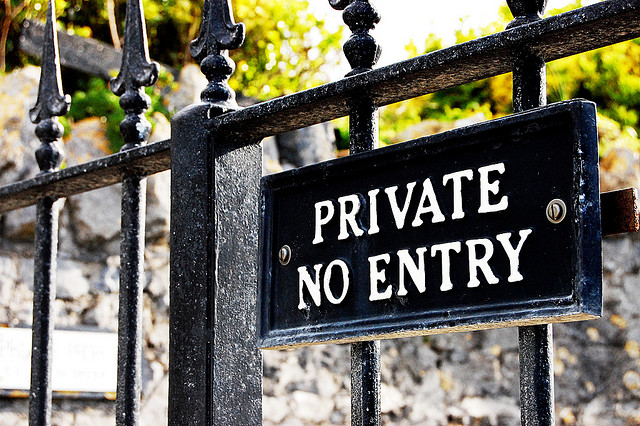 This post is the first of a  two part series, initially prompted by the release of Diipo, a new Web2.0 learning platform. In writing it though, it has come to more accurately represent my current thinking about Virtual Learning Environments in a broader sense. I currently use Moodle in my own teaching practice but have, more and more, looked beyond it’s walls to find tools that do a better job.

The trouble with VLEs

Diipo’s about page explains that it brings together social networking, blogging, online collaboration, file sharing, as well as the kitchen sink. It also boasts a secure environment allaying (the usual) fears about privacy and safeguarding. The combination of tools wrapped up inside a secure environment may provide convenience as well as reassurance, but at the same time, a walled garden is created. The wall separates the learner from the real world and often puts their learning inside of a silo, where it can be difficult to get information both in and out of. Moreover, as Colin Maxwell argues: “they’re (VLEs) closed environments, and only teachers and registered students can access them – but education happens everywhere and shouldn’t have these boundaries.” I couldn’t agree more having already argued that education needs to be given back to the people (en mass) not locked away.

This is not to say that all VLEs are bad. They have their place and some are used really well; you only have to look at the Open University to find evidence of this. Their VLE is accessed by a significant number of learners from around the globe, logging on, choosing to get their education online rather than from within the confines of traditional institutions.

However, many VLEs become nothing more than web based content management systems. They offer little in the way of effective learning and can turn learners off as much as they could potentially engage them. Doug Belshaw, interviewed at the Plymouth e-Learning Conference, suggested that learners do not necessarily want to have another place to put things… and went on to ask the question: should we not go to where the learners already are?

While Diipo, Moodle and other learning platforms offer a variety of learning solutions in one neat package it is my contention that the same is offered openly on the web in more relevant and manageable applications.

In case you haven’t noticed Facebook and Twitter do social networking really well. All of my students use Facebook and quite a number of them use Twitter. Why would I choose to engage them in a social network that has zero credibility when they are already participating in the two most powerful and engaging online communities that exist? Privacy? Safe guarding? The fact is that Facebook and Twitter are part of young people’s lives. They spend a significant amount of time using them and so do many adults, including their parents. By blocking Facebook and Twitter in schools (as is done with many other aspects of the World Wide Web) we simply reinforce the message that schools are for learning and that anything you learn outside of the classroom (physical or virtual) is not as valid. Well, we surely don’t believe that, do we?.

Learning is changing; where and when learning happens is shifting. It’s time that more of us (educators/learners) begin to address this shift and consider ways to plan for what Dean Groom has coined “downtime-learning“. A number of schools and universities are effectively doing this, using Facebook and Twitter to keep students and parents informed about events, key dates and setting homework. Some, have gone further creating study groups and completing assessments online. Just take a look at Nottingham Trent University’s Facebook page to get a flavour of its potential and both Yale’s and Johns Hopkin’s Twitter streams are goldmines of useful information, available to not just their own students but anyone who chooses to follow them.

By following some straightforward rules Facebook and Twitter can be used by both teachers and students without putting either party in jeopardy. There is no need to be ignorant when there is plenty of guidance available about how to harness the power of social networking safely.

Embracing social networking as a useful and valid learning tool can remove many of the earlier mentioned barriers, and open learners up to a broader spectrum of thought. The truth is that  many of your students already discuss their homework with each other while they are on Facebook. Mine do, all the time. What else could they be discussing/doing while they are logged in? I actively encourage my A-Level Media students to put their finished films on Facebook as it will be the quickest and most effective way of generating the feedback they need to complete their evaluations. I’m not logged in, I’m not chatting with them online, but I am saying to them Facebook is good, it has value, harness its power.

Facebook (600 million users) and Twitter (200 million) represent a significant portion of the world. And the world is the biggest classroom there is. As we prepare young people to be successful within a global community should we not teach them within that community rather than shutting them off from it for seven hours each day? When they leave my class they go online (via 3G) and when they go home they log on. I can’t control this, nor can their parents to some extent. What I can do however is teach them to be responsible and safe when they are there; helping them to use the World Wide Web to improve their learning, to improve their lives.

Diipo, Moodle, Blackboard do little more than put walls around learning keeping the selected few in and the rest of the world out. They reinforce the traditional notion of teacher directed learning, of school based education. If schools do kill creativity, as argued by Ken Robinson, do VLEs contribute to this? Should we be defining when and where learning takes place? Learning can (and should) happen wherever the learner is. Perhaps, it’s time we went to them rather than the other way around?

Coming up in part two: collaboration, assessment and why Google’s myriad of apps is a better deal than Diipo, Moodle or Blackboard.