For the second time in less than a month I find myself inspired to write a blog post after sharing a screen shot via Twitter. Last time, it focused on how I was using Evernote to organise my notes for my MA. This time is slightly less direct in that the item I’m going to write about had nothing to do with why I tweeted out the screen shot. 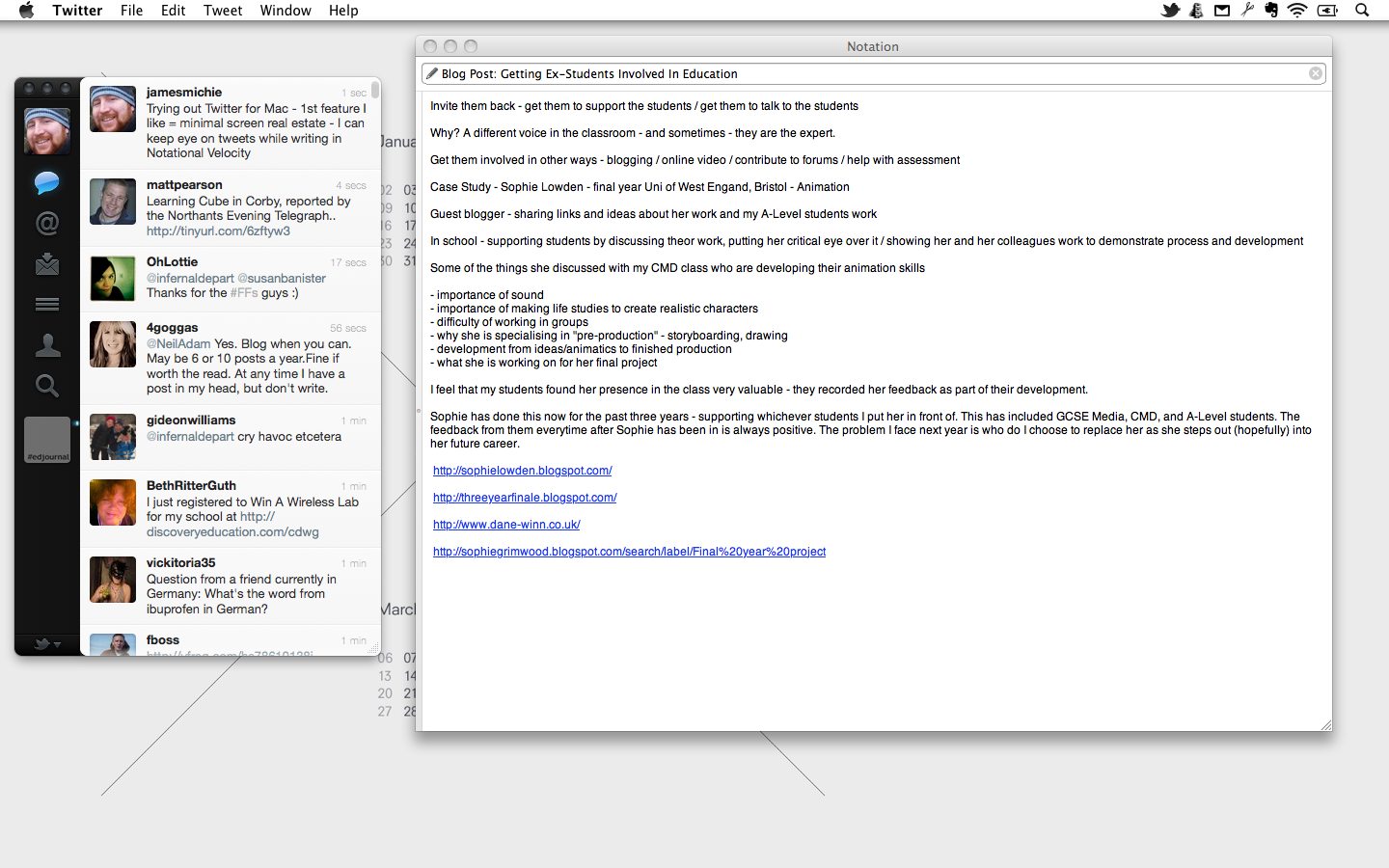 The screen shots purpose was to document the fact that I was giving Twitter for Mac a try and was enjoying the small amount of screen real estate that it consumed; meaning I could have other apps open and visible at the same time. In this case Notational Velocity. Not giving a great deal of thought to this at the time I grabbed the shot not realising that the image also offers an insight into my writing process. What is revealed in the image is the earliest written draft of a blog post. I call this the earliest “written” draft as the first draft is the version in my head. Rarely the version that ends up on my blog though.

Ideas for blog posts come to me at all times of the day, from many different directions, but more often than not – after a day of work. At that time I’m not usually at my most productive so save writing posts for the morning or weekend. What I do though is write down the idea, usually as a series of points. This some times translates directly into the paragraphs that will make the post and other times the final post has no resemblance to the initial idea that was written down.

Most of the posts on this blog have gone through either 3 or 4 drafts. After making my notes (draft 1) I will leave the idea to simmer a little. I then return and flesh it out (draft 2). This is all done in Notational Velocity. At this stage I may have collated some links but certainly have not thought about visuals if I choose to use them at all. I have simply focussed on the writing – the most important part IMO.

If I am happy with this draft I will copy and paste it into WordPress, add all of the links and any images/media that is to be included; check the code; add categories and tags; and voila a post (draft 3) ready to be published. From time to time however I will get this far, read back over the post and decide that something is not quite right. If that is the case I will leave the post as a draft for 24 hours and return to it with fresh eyes. Nine times out ten I will realise what was niggling me, correct it and then hit publish (draft 4).

There are times that I’d like to be one of those prolific bloggers who posts daily, pushing out first draft after first draft but I just can’t do it. Partly because I’m a perfectionist and partly because many of the things that I choose to write about need a little gestation time. That said, I have found using Posterous for a more personal / non #edtech blog has given me a bit more freedom to post with a little less need for polish, but then that blog is not as widely read as this one.

Writing is a very personal process – it deserves focus, time and more than a little TLC. F,or anyone who is thinking about starting a blog the most important things you must do early on are: 1. Find a writing methodology that works for you and: 2. Find the right writing tools that will help you focus on the writing, whether that be pen and paper, direct into your blogs editor or on a dedicated writing app. Making your blog/posts colourful; embedding media; adding buttons and feeds are not as important as the writing. All of the bells and whistles can be built up over time but for people to return to your blog regularly the writing must be good.