There is a lot of discussion within the #edtech community about the value of using Twitter within the classroom, which is, in turn, followed by a second conversation about whether educators should be using Twitter in school at all.

I personally believe that Twitter has the potential to be invaluable within education as long as the right safeguarding precautions are taken.

The most obvious use for Twitter I feel is to utilise it as a tool for giving feedback as part of assessment for learning.  Therefore, I decided to start there and trial this with one of my Year 10 classes.  Why Year 10?  Mainly due to the fact that I believe they are mature enough to handle the use of Twitter sensibly and that if successful it could become part of our working process; having time to develop its use through to the end of Year 10 and beyond.

My students set up their accounts with me in the classroom.  I gave them a clear set of instructions about how to set their account up – most importantly that their account name be created in such a way that they can not be personally identified by it and that their account is locked so that they can control who is following them.  To make the “following” aspect even more straightforward I followed (with a specific Twitter account I set up for use in school) all of them and created a group “list” that they could then follow.  It meant that they were not searching through lots of other people to find each other and possibly coming into contact with people and tweets that they shouldn’t.

I wanted to be sure that they looked on this as an educational tool – although that was not too hard as some of them were quick to tell me that: “Twitter is for old people like you sir and Facebook is for us, teenagers!” – thanks a lot I thought to myself.

The group of students I decided to trial this with were my Creative Media Diploma students.  They are a small pilot group so provided a situation that was manageable to try out a new form of Assessment For Learning.  Here are some examples of tweets by the students: 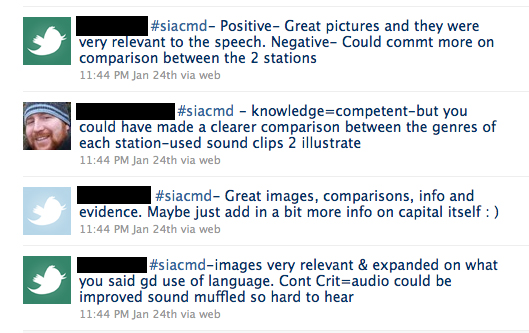 I feel that the 140 character limit was actually one of the most effective aspects of the process – the students found it challenging at first but once they got over the fact that they were being allowed to communicate as they would in a text message or e-mail with friends they quickly adapted and began sending very short but constructive comments to each other.  The unit had culminated in the students creating a multi-media presentation (animated still images and audio) comparing BBC Radio 2 with either Capital FM or XFM.  The students were required to evaluate both the analytical content of the presentations and the visual/auditory features.

To facilitate the process each student was assigned a hash tag which was made up from the first three letters of their name and then the initials of the course “cmd”.  This allowed for easy searching and provided some uniformity and structure to the task. I asked them to make one positive comment and one comment that offered some constructive criticism.  This was handled fairly well and only one student on one occasion wrote something about another students work that the rest of the class and I felt was not appropriate.  Due to the public nature of the process the students were quicker than I in picking up on it, making the student who sent it send a tweet apologising and for them to delete the offending tweet.  You see it is about teaching the responsibility.  If we treat what we do online seriously they will take it seriously.

Each hash tag ended with cmd as an identifier of the task being evaluated.

After the evaluations were complete the students were asked in the following lesson to use Twitter Search to locate all of their tweets.  They printed out a copy of all the tweets that contained their given hash tag for their portfolio and read through them reflecting on the positive and negative points that they had been given.  They then set themselves two targets. One target explaining how they could improve the content of their presentation and one target as to how they could improve the visual/auditory features.  Here is an example of a students targets which they submitted to our Virtual Learning Environment (moodle), printed out and stapled to their tweets inside their portfolio.

This was an enjoyable and (I feel) highly effective process.  It certainly was for me as a teacher, being able to offer feedback and advice instantly but in an alternative way to the usual verbal approach.  The 140 character limit helped I believe as I had to get to the point rather than waffling on! There was a record of it all, just as if I had filled in some laborious assessment sheet. And they were able to respond to the feedback and they got to not just know what I thought but what their peers thought as well.

Furthermore, it was helpful to me to see what the other students were saying – giving me an insight into the way they saw each others work at the same time I was assessing and evaluating it.  This made me stop sometimes and re-evaluate what I was saying in terms of feedback.  As the process developed, being able to read each others tweets, we all got better at it – providing better and better feedback for the student being evaluated.

While Twitter remains available at school I will definitely use it again for this process and hopefully for others.  I have considered using Twitter to help develop my Y10 English class’ writing skills – a story or poem developed tweet by tweet!  I also saw, just today, as I was working on this post that @tombarrett used Twitter in his classroom today using his PLN to tweet what the weather was like in different parts of the country.  I’ll say no more as I know that he plans to blog about it himself! This to me was a fantastic use of Twitter in school and exemplifies the value of it being left open and free for use, not shut down (behind a firewall) like so many other great social learning tools seem to be.

If you would like to know more about this project or other ways I plan to use Twitter in my classroom please feel free to tweet me @jamesmichie.