As Google Chrome comes of age (in beta at least) I have kicked Firefox to the kerb, an act that I thought may never happen, for 95% of my web experience. The only thing that is keeping the Fox in my life at all is the poor integration Chrome offers with Moodle which is my schools VLE of choice. More info on Chrome’s shortcomings with Moodle and how to get past them (unless you only run Apple products like me) can be found on “Changing The Game” a Moodle-oriented blog written by @iusher.

I’m not going to dwell on Internet Explorer, Opera and Safari for very long. It’s a simple matter of security + usability + reputation that turned me into a Firefox user in the first place. IE as has been widely written about is simply not secure enough. On top of this it is a Microsoft product so is automatically put in the do not use pile for me. While I consider myself to be something of a geek, Opera is one step too far as Browser’s go; in much the same way as Linux is in terms of operating systems. What did surprise me was the fact that I didn’t turn to Safari as my browser of choice. Having started life as a Windows user Firefox came more naturally into my web based experience – or in other words the Fox did a better job of marketing itself.

When I started using Firefox, its reputation was already well established as a stable and secure browser. Then “add-ons” were introduced there was no turning back. Firefox was simply awesome contributed significantly to my “geek” development. As I sought ways to make my web browsing experience better the Fox taught me about user scripts via Grease Monkey and how to edit its’ functionality itself. See this guide on how to speed up Firefox. What I ended up with and used for the past couple of years never considering alternatives was a very fast, very user friendly (due to add-ons), very consistent web browser.

However the Fox had its limits. There were so many add-ons that I would want to try them all out. But Firefox was not always up to the task. Install more than 10 add-ons and even with the tweaks that I had made to speed it up it became more like “Smokeyfox” than Firefox – the metaphorical smoke pouring out when it fired up or tried to load a page with a lot of info. The experience that many of the add-ons were supposed to offer became limited when they were all packed in together. I ended up stripping Firefox back in the end to just a few add-ons and scripts. This made the browsing faster but the experience less rich.

Chrome on the other hand is faster than Firefox even with “extensions” and scripts installed. I was sceptical at first but I (like a good geek) did several tests to see if the claims were true. And yes, they were! My take up of the browser was stalled though as functionality was limited in its initial release for Mac. Bookmark integration was not fully sorted and there were no extensions available. I bided my time and waited for the first stable release to really get to grips with it. I fell in love immediately because Chrome embraces the true aesthetics of Mac – clean simple design. Use Chrome for a few minutes and I fail to see how anyone could not like the simplicity of the interface, it is beautiful. 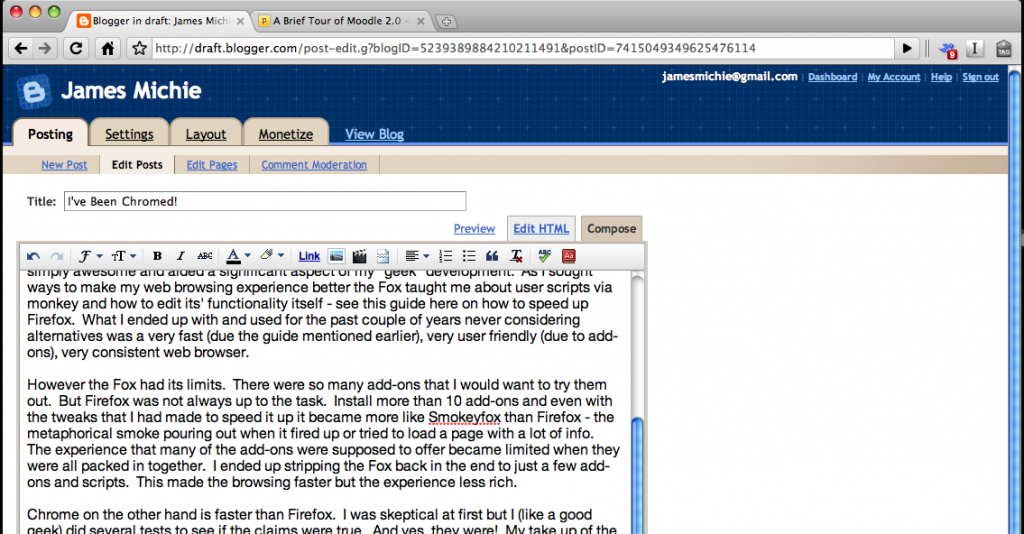 Look closely at the picture above. What you see is what I want to see. I have a variety of scripts and extensions installed but many remain invisible working from within the browser itself. There is no need for clunky menus and the tab positioning and functionality is great. Chromed Bird, Instachrome and Delicious all use pop-out windows that float in front of the browser when you click on them. Finally, the Omni-bar is truly great – search, history and my delicious bookmarks are all integrated into one space. This makes the use of the browser so much smoother and cleaner. 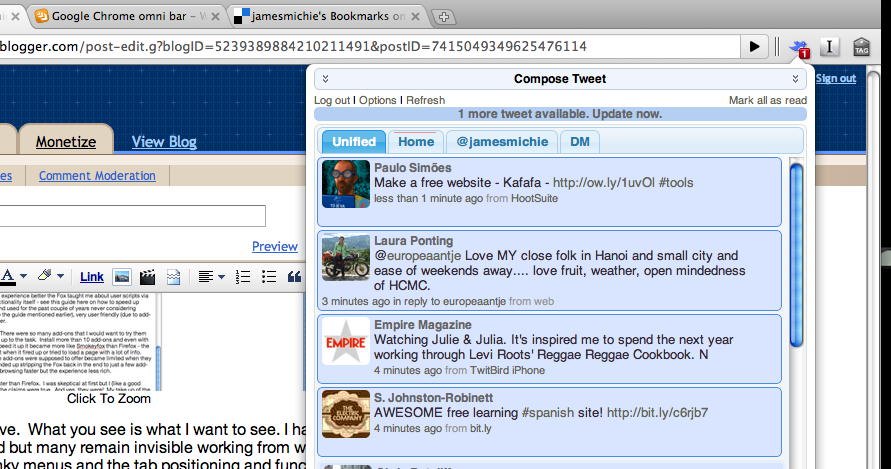 I am currently using the development channel, this enables me to not only use extensions but also to install scripts from sites such as Userscripts.org. Chrome extensions make the experience as rich as Firefox but they have almost no impact on operating speed. User scripts load directly in to Chrome without the need for an extension such as Grease Monkey. The installation process of all extra Chrome features is very smooth and there never a need to restart the browser. Below is a screen grab of just a few of the extensions/scripts that I have installed. 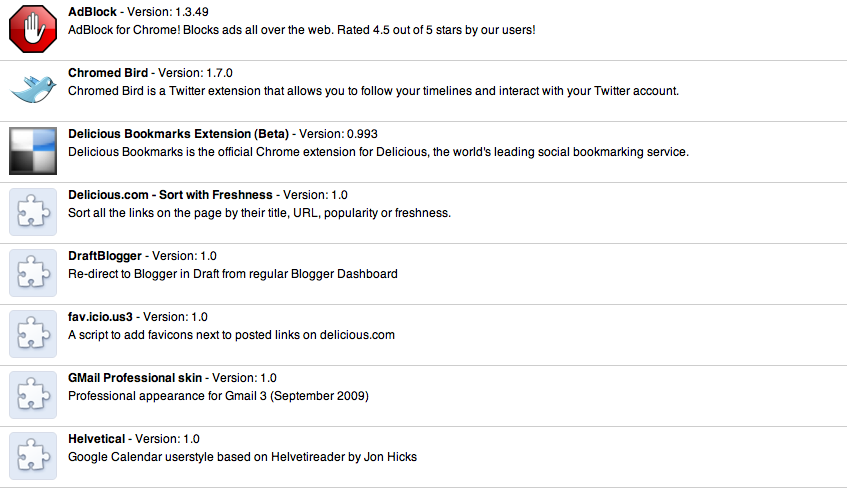 Sites that I frequent load as fast with the extensions enabled as they do disabled, making the Chrome experience truly worthwhile. Whether a solution arrives through Chrome first or when Moodle 2.0 (Check out this brief tour here) is finally released I will kick Firefox to the kerb permanently. Until that day, the Fox will still play a small part in my life.

It will not be long though and the time will have come to say “goodbye old friend”.