Since this whole blogging thing started with my new iPod touch I thought that it would be fitting to make my final post for week one of “James Michie…a 21st Century Educator” an update on my progress learning to use it, the apps I’ve added/deleted and my first game download. 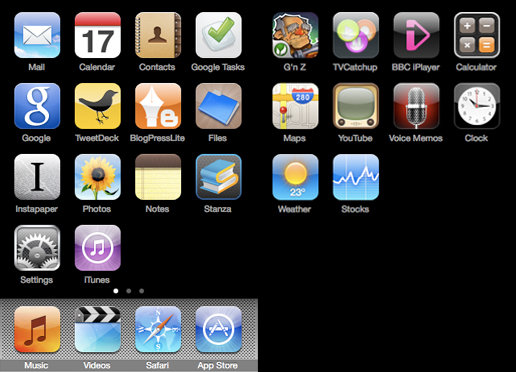 The image above is my current set of apps and the layout that I am currently working with, since my last post I have done the following.

Well, that is all for this week.  I have enjoyed exploring and learning to use my new iPod.  Being back at school next week will give me the opportunity to push one or two of its features further inside the classroom and during meetings.  It is my hope that it goes someway to furthering my efforts to be paper-free!  I can’t really call myself “…a 21st Century Educator” if I’m still reliant on pen and paper, now can I?