This is the third in a series of four posts about my experiences of using Google docs in the classroom. You can read part 1 here and part 2 here.

I will begin this part of the series by offering a little contextual detail which will help you (the reader) make better sense of this. Year 10 students (High School Freshmen to my American peers) in my school sit exams in March – intended to be their first real experience of externally set GCSE exams. Having begun this past year introducing the new OCR GCSE Media Studies syllabus, I decided that we would have the students sit their exam module in June of Year 10 rather than at the end of Year 11. Reasons? The exam is worth only 40% of their total mark, the exam units give the students a well rounded understanding of all the key media concepts, we will have more time to develop practical skills before completing controlled assessment of those skills in Year 11. Having committed to this set up the students studied the two units and sat a mock paper in March. The results were reasonably good but there was plenty of room for improvement across all of the grades. It was here that I had an “a-ha” moment. I could use the multiple editors / real time editing functionality of Google docs to good use. What if I had the students work through each of the exam questions in Google docs, I mark it, identify errors, set targets; they go back in and re-edit; I re-mark their work and so on; allowing them to develop their exam skills?

This concept is not new! The methodolgy is grounded well within assessment for learning practices and can be achieved in the classroom without the tech. What I was hoping was that the features of Google docs would improve the process, augmenting it, so that it would be sped up, increasing the productivity of both myself and my students. My belief that this could be the case was based on my previous use of Google docs to collaborate in planning – this had successfuly improved that proces ergo it could do the same for assessment for learning.

I set about planning an introduction to what we were going to do. I brought along a copy of the English department’s marking code as one of the issues for a number of my students was not their knowledge but the way that they expressed themselves was stopping many of them from achieving the higher marks. 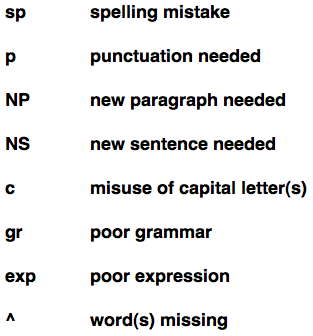 I copied up one of their responses and marked it in Google docs to demonstrate what a piece of marked work would look like. There were several possible approaches to this. For example there is a built in comment feature. However, I selected my own method – a mixture of my traditional marking techniques and the technology of an electronic document. I like to comment directly around or next to the error so this I retained by inserting my comments within parenthesis. I utilised the bold font feature to make it clear to the student where the offending punctuation, word or sentence was. I felt it was important to model this so they knew what to expect. At the bottom of each response I would follow another well practised feature of assessment for learning by including a positive comment followed by two specific targets to improve. What I did do however, was also give a specific mark each time, allowing the student to see numerically how they were doing. Were they improving, staying the same or getting worse? Here you can see an example of a marked first draft: 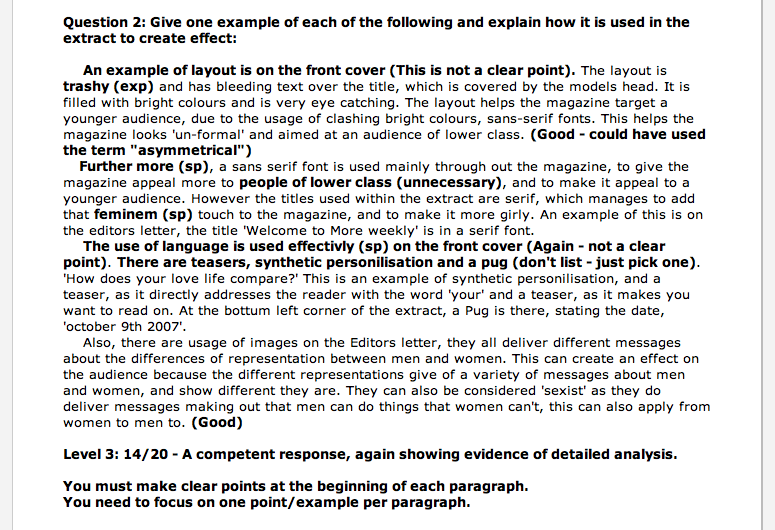 Working in this way, with the students sharing their work directly with me, had a massive impact on my approach to both using Google docs in the classroom as well as the way I approached assessment for learning. When I started the students on improving their essay writing skills I decided to allow them sometime to work on these skills in class. I targeted specific students based on my knowledge of their weaknesses and potential and began to assess their work in real time with them. This 1-2-1 real time editing allowed me to target and support different groups of students across a series of lessons. I saw an immediate impact on their learning. Due to the immediacy of the intervention it really helped the less able students get up to speed and the more able were pushed beyond the standard they had been producing. Red pen was removed from the process and many said that they felt better having their work assessed as they wrote it because they “hated it when they had worked so hard on some work only to get it back littered with corrections”. In real time they could see where they were going wrong and correct it there and then. This meant that I could move them forward in their skills at a far more rapid pace.

I continued this process over five weeks. Every homework (2 per week) involved responding to practice essay questions (draft / re-draft), while in class we worked on analytical skills and explored the finer points of representation, institutions and audiences. This new approach created a culture of expectation. I’ll be honset and say that it put quite a demand on me to keep up with my marking. With work being submitted / updated in a far more fluid manner  it created a situtation where for once I was forced to follow my own good advice: marking little and often rather than allowing the marking to amass. Here is an example of a students work that has been through several drafts, each time given a mark and targets for improvement. 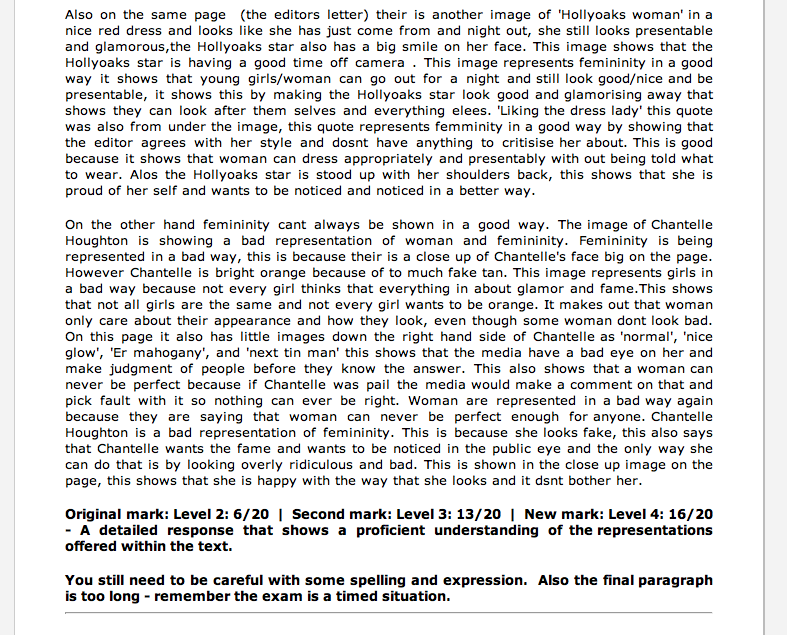 The results of this approach brought assessment for learning into the heart of my classroom and had a significant impact on many of my students. I have found that students are usually mostly interested in assessment of their learning caring more about the mark or grade. As I chose to combine both the assessment of their learning with target setting throughout the process many of the students became more focussed on how to improve their work than on the actual mark itself. Some became so deidicated that they would re-submit their work less than twenty-four hours after I had marked it. And some would email me if I had not marked their work in a few days eager to see how they had done and how they could improve further. Here are some examples from one student showing her development through the five weeks:

Example 1: After 2 weeks: One response has been drafted twice. Here, you can see the original mark and improved mark including targets for further improvement. There are also two other questions that have been responded to and I have marked them offering guidance on how to improve.

Example 2: After 5 weeks: Here is the same student responding to a new set of questions the week before the exam was due to take place. Her responses are excellent demonstrating a high level of progress.

While demanding, using Google docs in this way completely put the focus on the students’ writing and exam skills. The most gratifying outcome of this was the progress that they made. They felt confident walking in to the exam because of the number of practice questions they had completed and that the feedback on how to improve had been so regular. I feel that the technology actually transformed an approach that is very much achievable in the classroom. The amount of writing that the students had to do was significantly decreased. Once a response was drafted they never had to re-write the whole thing – which they would have had to do if they had written their reponse to the questions by hand on paper. This, I believe, was a significant motivating factor for many of the students; ensuring that not only the hardest working students made progress but those students who would have found the amount of writing involved (re-drafting by hand) too much to handle also made progress.

A further benefit was that assessment came to inform the content of both my lessons and revision sessions in the run up to their exam. Marking little and often, having the students redraft and develop their skills allowed me to see patterns and areas of weakness within the class quickly; allowing me to adapt what I was planning and focussing on. The impact on me was therefore as beneficial as it was for the students. I certainly plan to use Google docs in this way again next year. It is very rewarding to be able to connect 1-2-1 with m students at this level, guiding them and supporting them in their journey to become more articulate writers. It is an approach that needs forethought and planning but is ultimately, I believe, the best approach to ensuring individual students make progress.

If you would like to use Google docs to support assessment for learning here are my recommendations on how to get started.

Next time: What’s Next?